Corylus colurna (Turkish Filbert or Turkish Hazel)
This species, native to Turkey and surrounding areas, is extremely resistant to Eastern Filbert Blight. Unlike the shrubbier C. avellana (European Filbert), C. colurna produces a single-stem tree with an upright, pyramidal shape. This host thrives in hot summers and cold winters. It is also extremely drought tolerant once established. USDA zones 5-7 are acceptable for this host tree.

Quercus ilex ssp. ilex (Holly Oak)
Quercus ilex, an evergreen oak species, is the common host tree in Spain and other truffle-producing areas. While it is happiest in Mediterranean climates, Q. ilex does remarkably well in the Southeastern United States. Cold hardiness is an issue with this species, as it will struggle in USDA zones 6 or colder; significant damage occurs from the cold in Zone 7 in some years. Surprisingly, it has been promoted and sold by our competition in areas where it simply cannot tolerate the cold temperatures. Best suited for Zones 8 and warmer. 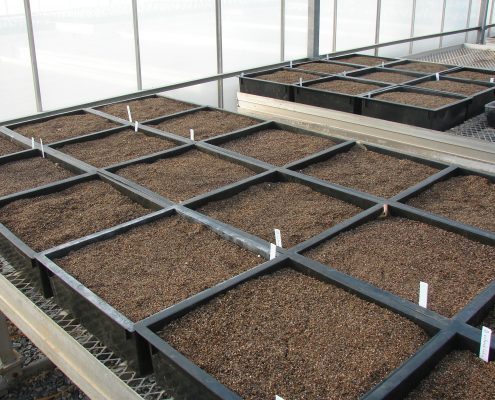 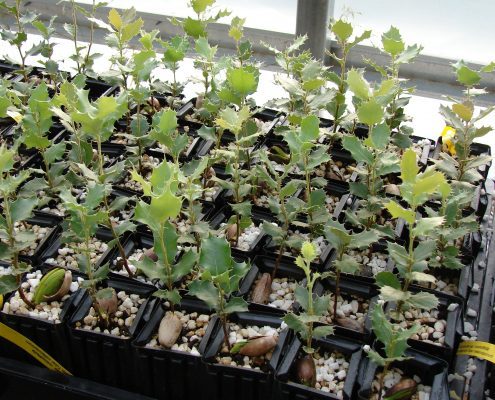 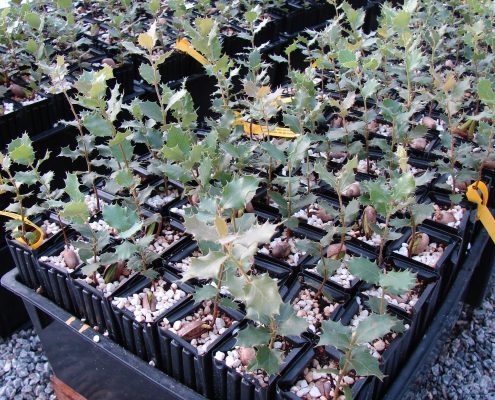 Quercus faginea ssp. faginea (Portuguese Oak)
This Oak is another ‘go-to’ species in European truffle orchards. A deciduous species native to the Iberian Peninsula and the Pyrenees, it’s also more cold hardy than Q. ilex ssp. ilex and Q. ilex ssp. rotundifolia. We recommend considering this species for your plantings to increase biodiversity in your orchard. A little about biodiversity: planting a single species of tree is problematic and can facilitate the spreading of disease. Monoculture is a well-documented problem in farming, especially for orchards. While difficult to plant and manage two host genera, mitigating disease and insect pressure by opting for biodiversity are two key benefits to your truffière. In addition to the significant profit factor, avoiding pesticide use on food crops is another major benefit to planting several host genera. This biodiversity reduces the need for pesticide and fungicide use and ensures a higher degree of productivity.

Re-Inoculation
Until recently, truffle mycology was an obscure field with much to learn. And to be fair much more needs to be learned. Inoculated trees begin their life in orchards with essentially equal positive and negative truffle mychorizae (think male and female.) For reasons not yet determined, a typical orchard will shift during the establishment years to primarily positive or primarily negative mycelium. This shift significantly reduces the fruiting productivity, and therefore the number of mature truffles. Specifically designed to re-introduce both sexes, our Re-Inoculation products restore equilibrium to the mycelium and the orchard. The impact is a much more productive orchard as well as more efficient, consistent harvesting. Contact us to learn more about this exciting, innovative concept.

Please inquire about digging tools and other truffle farming supplies. 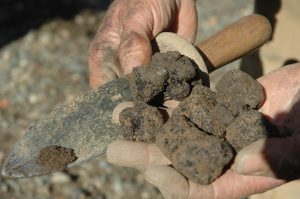 Call now to place an order or speak with an expert